“The end will be where the beginning is.”
Logion 18 from The Gospel of Thomas

After the birth of my son in 2009, I realized that I’d reached a point in my life where I could envision projects lasting 20 – 30 years. I also acquired a beautiful property in Bourgogne France, surrounded by many sacred sites (the Paleolithic Cave Paintings of the Grotte d’Arcy, the Temple to Mercury at Compierre, the relics of Mary Magdalene at Vézelay etc).

Having written a novel on Gnosticism called The Hidden Passion, and having lectured on The Gnostic Worldview, the time had come for an artist to step forward and depict The Apocryphon of John (a seminal Gnostic text) for the very first time. And so, the idea for The Apocryphon Chapel was born.

As an artist, I’m interested in painting 15 large-scale paintings for the interior, and designing the overall space. As the former director of The Vienna Academy of Visionary Art (and particularly its Cultural Space), I had a direct experience of the amazing kinds of sacred activities that can emerge, if only we leave the space open to those people who are gifted in that direction. So, the Apocryphon Chapel will embrace all spiritual traditions, and explore all healing modalities, while offering Visionary art on its walls. 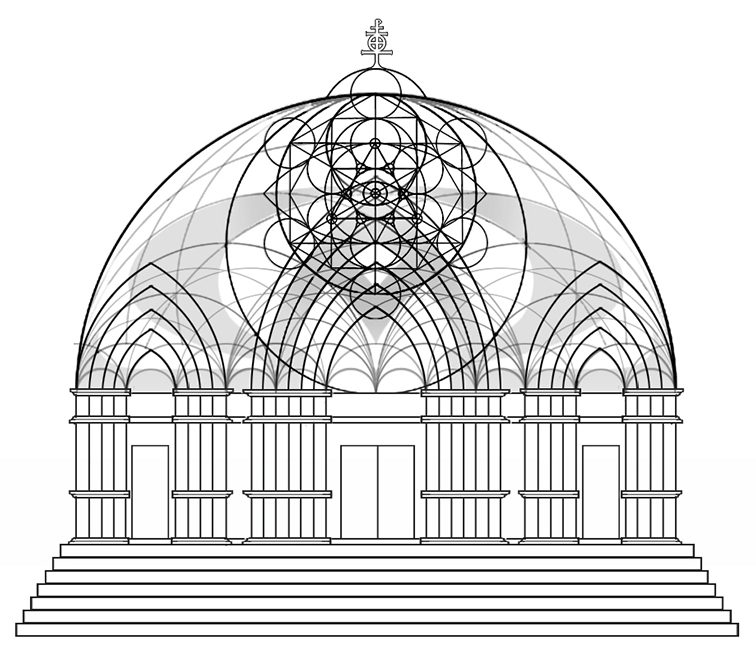 Above: A possible version of the facade, based on the floor plan below. 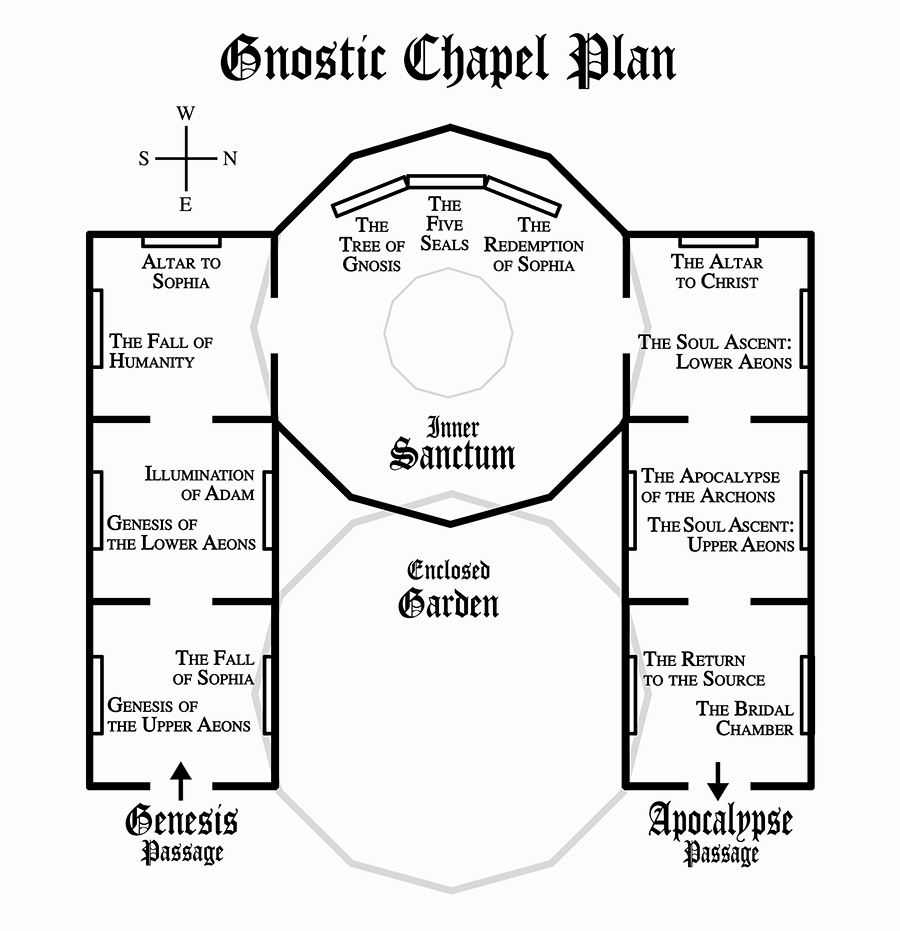 Above: The floor plan, which has three main sections.
One enters on the left and exits on the right.

The Genesis Passage has five paintings depicting the Creation. This begins with a series of emanations from the Divine One (The Upper Aeons) to The Fall of Sophia, as she engenders of the demiurge Yaltabaoth, who generates the lower worlds (The Lower Aeons). This leads to The Fall of Humanity in the Garden of Eden. At the end of the Genesis passage, visible through the series of doorways, is the Altar to Sophia with a painting dedicated to her.

The Inner Sanctum has a triptych before a baptismal pool, which depicts (left) Adam and Eve attaining salvation by eating from the Tree of Gnosis, (central panel) the five main sacraments of Gnosticism called The Five Seals, and (right) The Redemption of Sophia (who symbolizes the awakened soul) by Christ.

The Apocalypse Passage has five paintings and the Altar to Christ who, in a painting dedicated to him, gazes through the series of doorways to the exit. The five paintings depict the dissolution of the cosmos, including The Apocalypse of the Archons and The afterlife passage of the soul through the Aeons, until All are re-united with the Divine One through the Marriage of Christ and Sophia in The Bridal Chamber. 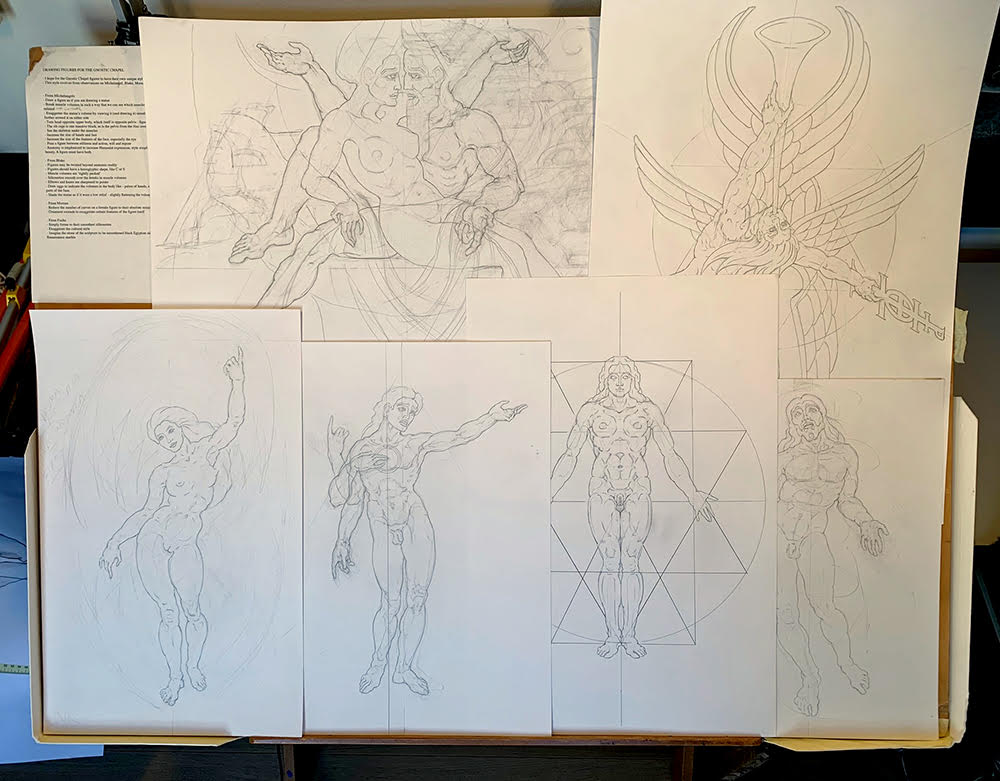 Above: A view of my drawing board where I am developing the main figures, inspired by ‘the Classical Ideal’
(as pursued by artists like Michelangelo, Blake, Gustave Moreau and Ernst Fuchs).
Top (l to r): The Mother-Father, one of the Four Lights.
Bottom (l to r): Sophia, Adam at the Tree of Gnosis, the Anthropos, Christ.

Above: A peek at the bottom half of the first painting – background only – which depicts the heavenly architecture as The Halls of Wisdom. All the figures which I’ve drawn (on my drawing board above) and laid out (in Photoshop below) will be traced out over this background and painted semi-transparently in spectral colours.

COMPOSITION OF GENESIS OF THE UPPER AEONS

Left: The composition of the first painting, The Genesis of the Upper Aeons. This Photoshop layout arranges my drawings (while also incorporating some photographic references).

Superimposed over the background of Heavenly Architecture, which descends to the Halls of Wisdom below, we have at the top: the Divine One in the form of glowing sacred geometry. From the Divine Eye at the centre of the sacred geometry, a ray of luminous vision descends and mixes with tears to form the Watery Light of the Aeons.

The first figures to appear in the Watery Light are the Father and the Mother (called the Divine Parent) who turn and embrace, creating the Christ through a kiss.

Christ surrounded by the Four Lights, named Armozel, Oriel, Daveithai and Eleleth, who are four angels gazing at Christ.

The baptismal waters of the Watery Light pass through Christ and around the Anthropos, a male-female being who is surrounded by the Twelve Aeons of the Mind, as allegorized by female figures (presently in photographic references).

Sophia or Wisdom, standing on the floor in the Halls of Wisdom, is the female counterpart of Christ above.

Listen to the Podcast of Laurence Caruana
in conversation with Earl Fontainelle
about his plans for The Apocryphon Chapel: